Legacy of Kaleva, an RPG game set in the imaginary land of the Kalevala (known as Väinölä).

At the end of the Kalevala, the virgin born “Karjalan Kuningas” (King of Karelia) is born. Because the child is a fatherless, Väinämöinen orders him to be killed in the swamp, but the child starts talking and rebukes Väinämöinen. Väinämöinen gets angry and leaves in a copper boat to the nether world. He vows to return when he is needed again.

Karjalan Kuningas (The King of Karelia) ousted Väinämöinen, but did not really defeat him.

After Väinämöinen's departure, the Kalevala and Karjala (Karelia) initially continue to live normally, but little by little the world that cannot move forward begins to fade and become distorted. With the Karjalan Kuningas (King of Karelia), great people (Ilmarinen, Louhi, etc.) fade into the shadows of history, but the world cannot let go of the Kalevala.

Due to the distortion of the world, even the “tuonela” (underworld) itself begins to seep back to earth, or that the dying can no longer enter the "aliseen" (subordinate) "tuonela" (underworld). The world has reached its “breaking point”. The daughter of the Karjalan Kuningas (King of Karelia) is a person whose task is to bring the world forward and liberate the Legacy of Kaleva.

The game is currently being developed by Bytedev Oy (Bitecore) and will be tentatively completed in the end of year 2024.

The agreements are still in progress, but the game is expected to be released for all modern game consoles as well as PCs.

Follow us on social media and get the latest information, or subscribe our newsletter at the bottom of the page. 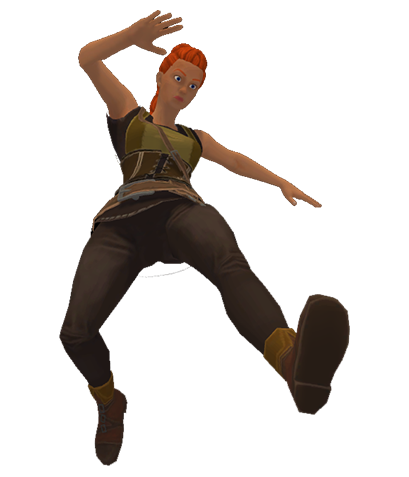 The main character of the game.

Daughter of the Karjalan Kuningas (King of Karelia).